Our understanding of a Grandparent is that of an Elder who through their lived experiences pass on important values, beliefs and ideals to future generations.

We wish to recognize and celebrate your wisdom and love in this retreat weekend.

In this guided retreat there will be some quiet time along with prayer meditation time to reground yourself in what really matters bringing you back to who you are and the God that created you.

In this way you will deepen your awareness of your beautiful and sacred self within the context of your sacred history.

In the words of St. Ignatius of Loyola, your true self is “to desire an interior knowledge of all the good I have received, so that acknowledging this with gratitude, I may be able to love and serve our Loving and Compassionate God in everything”.

You will be guided by a team made up of Julia Donahoe-MacDougald, Fr. John Lacey, and Gilles Michaud.

Cost for the week end retreat:

Because of the pandemic and its physical distance guidelines we are limited in the number of participants that will be accepted. To register please contact: Earla and Martin Avery at Our Lady of Hope Retreat Centre 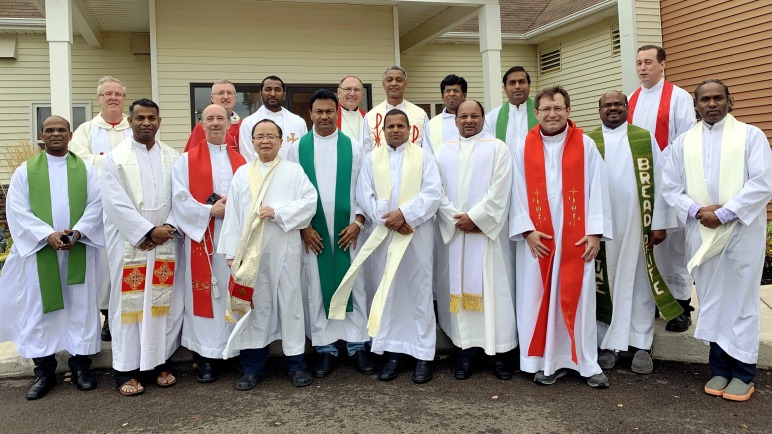 Bishop Richard Grecco facilitated the annual spiritual retreat for Arch Bishop Peter Hundt and the Priests of the Diocese of Corner Brook.

The retreat was held at Our Lady of Hope Retreat Centre the week of October 13.

We are very happy to receive groups from far and wide to experience the hospitality and spiritual refreshment offered here on Prince Edward Island.

Father, Creator of all

We come before you

this place built on Holy Ground;

this place surrounded by nature at its best

with an ocean view —

all of which you have created.

We ask your guidance on all who enter for spiritual growth;

May their tine here refresh mind, body and soul.

Holy Spirit of truth and wisdom,

Open the hearts of all who spend time here

To the many opportunities offered.

Inflame them with a desire to live

Every day in love and service.

Our Lady of Hope restore us,

So as we go forward

We can spread hope, peace and joy

To our families, community, province, country and beyond.

May God Bless Us each and every one. 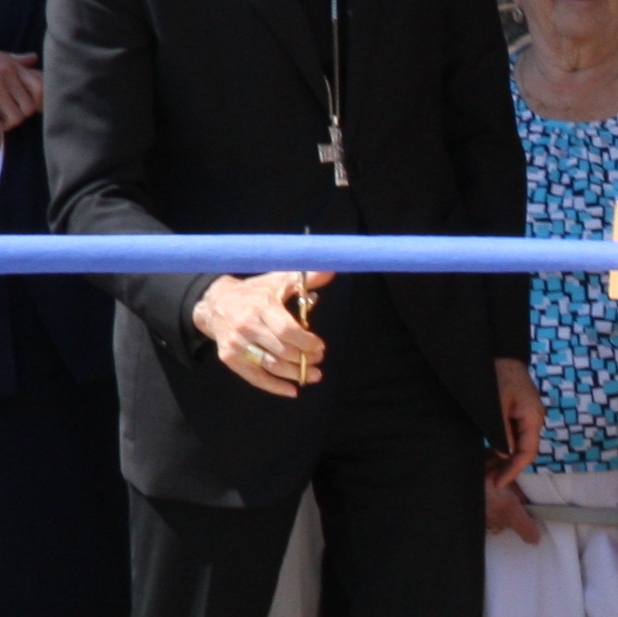 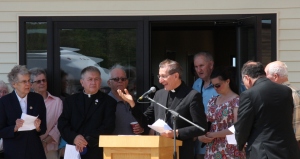 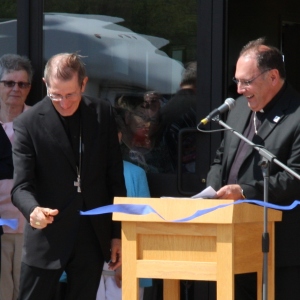 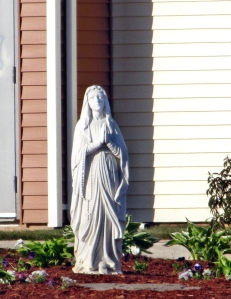 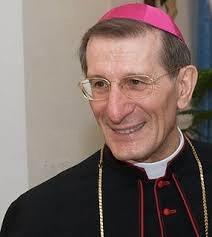 It is a rare occasion when the Apostolic Nuncio makes a visit to an individual Diocese.  But this is precisely what is occurring in Charlottetown during the early part of June, 2017.

“I am pleased to announce that the Most Reverend Luigi Bonazzi, the Apostolic Nuncio to Canada, will be visiting the Diocese of Charlottetown during the period, June 10-13, 2017”, stated Bishop Richard Grecco.  “It will be an honour to have his Excellency visit with us during these several days.”

The Apostolic Nuncio is the Ambassador of the Vatican to the Government of Canada and is also the Papal Nuncio (representative of the Holy Father) to the Roman Catholic Dioceses of Canada.  Archbishop Bonazzi has been a member of the diplomatic service of the Holy See for more than 35 years.  He has served as Apostolic Nuncio to several other countries such as Cuba, Lithuania and Estonia, and most recently Latvia.  It was in late 2013 that he was appointed Apostolic Nuncio to Canada, and officially arrived in Canada in February 2014.

The Diocese of Charlottetown feels blessed that the Apostolic Nuncio has decided to come for this special visit.  It is almost forty years ago that the previous Apostolic Nuncio, Most Reverend Angelo Palmas, visited the Diocese.  Archbishop Bonazzi’s visit will be a memorable time in the history of our Diocese.

For further information about the Apostolic Nuncio or his visit please contact the Diocesan Centre at 902-368-8005 or rc@dioceseofcharlottetown.com.

To all parishioners across PEI:  You are Invited to Our Lady of Hope Retreat Centre – OPEN HOUSE – 67 Reid Rd Bayview near Stanley Bridge, Sunday June 11, from 2 pm to 5 pm, A Brief Inaugural Ceremony at 3 p m.  Everyone is welcome… come see the beauty of this new Diocesan Centre   – Refreshments included

We should understand, beloved, that the paschal mystery is at once old and new, transitory and eternal, corruptible and incorruptible, mortal and immortal. In terms of the Law it is old, in terms of the Word it is new. In its figure it is passing, in its grace it is eternal. It is corruptible in the sacrifice of the lamb, incorruptible in the eternal life of the Lord. It is mortal in his burial in the earth, immortal in his resurrection from the dead.
The Law indeed is old, but the Word is new. The type is transitory, but grace is eternal. The lamb was corruptible, but the Lord is incorruptible. He was slain as a lamb; he rose again as God. He was led like a sheep to the slaughter, yet he was not a sheep. He was silent as a lamb, yet he was not a lamb. The type has passed away; the reality has come. The lamb gives place to God, the sheep gives place to a man, and the man is Christ, who fills the whole of creation. The sacrifice of the lamb, the celebration of the Passover, and the prescriptions of the Law have been fulfilled in Jesus Christ. Under the old Law, and still more under the new dispensation, everything pointed toward him.
Both the Law and the Word came forth from Zion and Jerusalem, but now the Law has given place to the Word, the old to the new. The commandment has become grace, the type a reality. The lamb has become a Son, the sheep a man, and man, God.
The Lord, though he was God, became man. He suffered for the sake of those who suffer, he was bound for those in bonds, condemned for the guilty, buried for those who lie in the grave; but he rose from the dead, and cried aloud: Who will contend with me? Let him confront me. I have freed the condemned, brought the dead back to life, raised men from their graves. Who has anything to say against me? I, he said, am the Christ; I have destroyed death, triumphed over the enemy, trampled hell underfoot, bound the strong one, and taken men up to the heights of heaven: I am the Christ.
Come, then, all you nations of men, receive forgiveness for the sins that defile you. I am your forgiveness. I am the Passover that brings salvation. I am the lamb who was immolated for you. I am your ransom, your life, your resurrection, your light, I am your salvation and your king. I will bring you to the heights of heaven. With my own right hand I will raise you up, and I will show you the eternal Father.
From an Easter homily by Melito of Sardis, bishop

Truly he goes to seek out our first parent like a lost sheep; he wishes to visit those who sit in darkness and in the shadow of death. He goes to free the prisoner Adam and his fellow-prisoner Eve from their pains, he who is God, and Adam’s son.

The Lord goes in to them holding his victorious weapon, his cross. When Adam, the first created man, sees him, he strikes his breast in terror and calls out to all: ‘My Lord be with you all.’ And Christ in reply says to Adam: ‘And with your spirit.’ And grasping his hand he raises him up, saying: ‘Awake, O sleeper, and arise from the dead, and Christ shall give you light.

‘I am your God, who for your sake became your son, who for you and your descendants now speak and command with authority those in prison: Come forth, and those in darkness: Have light, and those who sleep: Rise.

‘I command you: Awake, sleeper, I have not made you to be held a prisoner in the underworld. Arise from the dead; I am the life of the dead. Arise, O man, work of my hands, arise, you who were fashioned in my image. Rise, let us go hence; for you in me and I in you, together we are one undivided person.

‘For you, I your God became your son; for you, I the Master took on your form; that of slave; for you, I who am above the heavens came on earth and under the earth; for you, man, I became as a man without help, free among the dead; for you, who left a garden, I was handed over to Jews from a garden and crucified in a garden.

‘Look at the spittle on my face, which I received because of you, in order to restore you to that first divine inbreathing at creation. See the blows on my cheeks, which I accepted in order to refashion your distorted form to my own image.

‘See the scourging of my back, which I accepted in order to disperse the load of your sins which was laid upon your back. See my hands nailed to the tree for a good purpose, for you, who stretched out your hand to the tree for an evil one.

`I slept on the cross and a sword pierced my side, for you, who slept in paradise and brought forth Eve from your side. My side healed the pain of your side; my sleep will release you from your sleep in Hades; my sword has checked the sword which was turned against you.

‘But arise, let us go hence. The enemy brought you out of the land of paradise; I will reinstate you, no longer in paradise, but on the throne of heaven. I denied you the tree of life, which was a figure, but now I myself am united to you, I who am life. I posted the cherubim to guard you as they would slaves; now I make the cherubim worship you as they would God.

“The cherubim throne has been prepared, the bearers are ready and waiting, the bridal chamber is in order, the food is provided, the everlasting houses and rooms are in readiness; the treasures of good things have been opened; the kingdom of heaven has been prepared before the ages.”

A reading from an ancient homily for Holy Saturday

Almighty, ever-living God, whose Only-begotten Son descended to the realm of the dead, and rose from there to glory, grant that your faithful people, who were buried with him in baptism, may, by his resurrection, obtain eternal life.

(We make our prayer) through our Lord.

(Through Christ our Lord.)